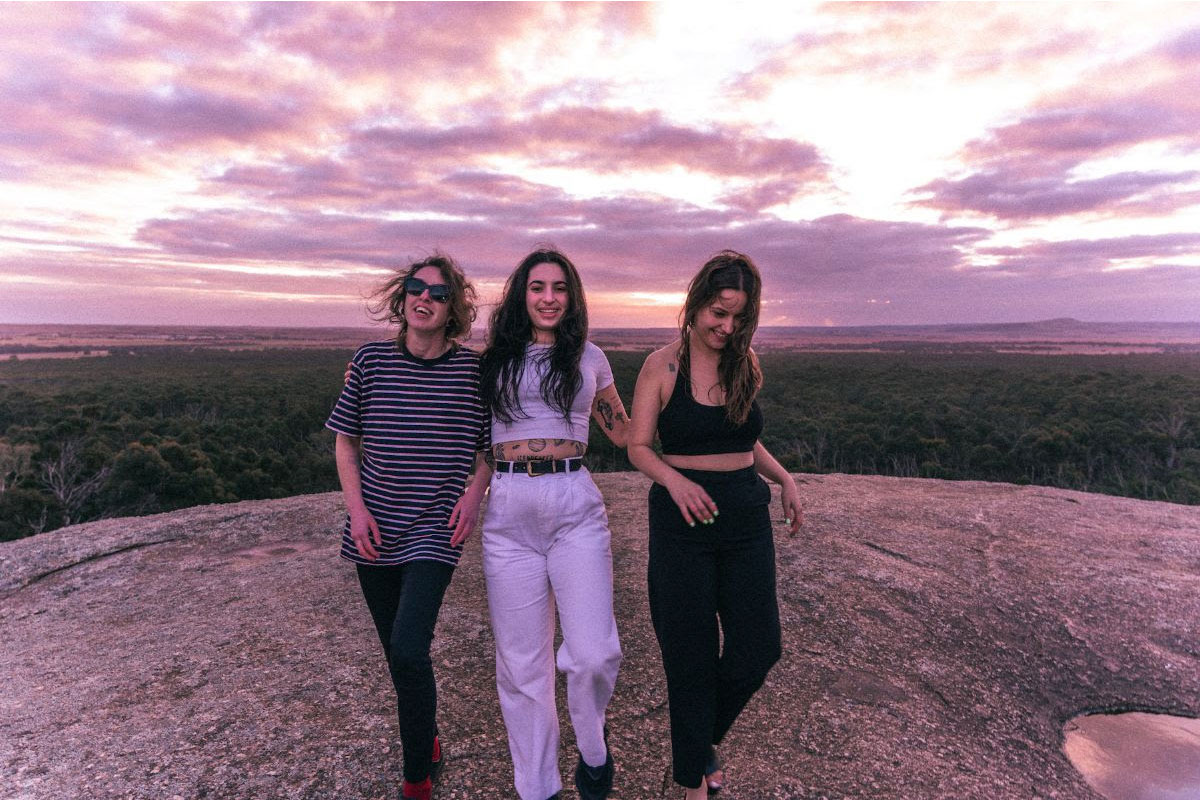 Running With The Hurricane finds Camp Cope on the other side of a storm. The third LP from Melbourne trio Georgia Maq, Kelly-Dawn Hellmrich and Sarah Thompson is about what happens after chaos hits; when you’ve walked through the fire and come out stronger, calmer and happier than ever before.

The band’s last album, 2018’s How To Socialise And Make Friends, put Camp Cope under an intense spotlight. That release allowed the trio to say what they needed to but both professionally and in their personal lives, they’re in a very different place this time around. On Running With The Hurricane, Maq (songwriter, vocals, piano, acoustic & electric guitar), Hellmrich (bass guitar) and Thompson (drums) are older, wiser and happier. It’s an album that is gentler than what they have done before, more positive and more at peace with the universe. Because as Georgia Maq sings on the album’s title track, sometimes “The only way out is up”.

While the Big Stuff of this album is all about growth, overcoming and pushing through the pain, the little details are still quintessentially Camp Cope. Running With The Hurricane reflects on faltered romances, secret crushes and vibrating with the confidence that makes you feel like you’re on fire. It’s about taking comfort in knowing who you are, feeling yourself and returning, always, to the city of Melbourne.

Anchoring it all is Georgia Maq’s effortlessly poetic songwriting. This album sees Maq flex her talent for capturing the universal truths of love, life and self-acceptance in little vignettes; like unashamedly double texting or skipping a party to stay home at night and ruminate. On some songs, Maq sings about being full of love (The Mountain), getting vulnerable with someone new (Jealous) or learning to let affection in again (One Wink At A Time). Ultimately, though, these songs aren’t about other people, but getting comfortable with yourself.

Lead single Blue is about love, depression and accepting that nothing external can fundamentally alter what happens inside your own head. On the title track – which is named after a Redgum song of the same name, a nod to Maq’s late father – Maq documents how it feels to pull yourself out of a hole and bolt away reinvigorated. The Screaming Planet is about processing the world and sitting with yourself. Love Like You Do sees Maq yearn for connection and on the album’s emotional closing track, Sing Your Heart Out, she reflects on finding peace and wishing the same for others. From start to finish Running With The Hurricane bursts with generosity, compassion and heart, the work of a songwriter not afraid to get candid or reveal her fragile parts. “Let me show you how vulnerable I am,” she sings on The Mountain.

Both global and personal circumstances prompted Camp Cope’s change of perspective. Work on Running With The Hurricane began in late 2019 but when the pandemic struck a few months later, it forced a hiatus. The world had stopped and suddenly, there was no rush to get an album out and head back on the road. Instead, the band were able to sit with the songs, to think about how they wanted them to sound and the sonic approaches they wanted to try. There was time to tweak, refine and add new layers of instrumentation (including piano from Maq herself).

There was also the chance to learn new skills. In lockdown, Maq learned to control her voice and use it as an instrument, and began singing with a new tenderness. And while working as a nurse administering covid vaccinations, she quickly realised the importance of being able to authoritatively call the shots. It was a job where expertise was demanded and expected. That was something Maq took back with her into making music: she wanted to be the expert in her music and have the language to ask for exactly what she wanted out of the band’s sound. For that reason, Maq taught herself to produce and worked alongside producer Anna Laverty in the studio on Running With The Hurricane.

The pandemic took the pressure off their expectations, as well. Suddenly, music didn’t seem that important. The trio got to just create art for art’s sake, without worrying about how it would perform. The plan, as bassist Kelly-Dawn Hellmrich puts it, became to “just do something that makes us happy and might make other people feel good too.”

When it came time to record, some 18 months later, the band had triple the time in the studio than what they’d had for their previous albums. They had time to get every detail perfect and were able to bring in friends Courtney Barnett (on Caroline and Sing Your Heart Out) and Shauna Boyle of the band Cable Ties (on One Wink At A Time) to provide added instrumentation. The resulting sound is still recognisably Camp Cope, just a little softer, a bit more relaxed and much more refined. Running With The Hurricane is an album concerned more with creating beauty than noise and, undoubtedly, is their strongest work yet.

But it wasn’t just time Camp Cope had on their side. Running With The Hurricane finds the trio more confident and more skilled than ever before. If their previous two albums showed Camp Cope’s potential, this one fulfils it. Making Running With The Hurricane, the band knew their instruments like the backs of their hands. They were assured enough to ask for what they wanted in the studio. After years of fierce friendship and often relentless tour schedules, they had become innately comfortable as collaborators. Together they levelled up their skills, approach and sound.

As Maq describes it, “The first record was us diving into whatever Camp Cope created, the second album was us when we were in the thick of it, and then this album is about how we’ve come out the other side. And we’ve come out stronger, more loving, more peaceful and better friends.”

The success of their last album – and the media firestorm that followed – also became a liberator. In 2016, Camp Cope sprung out of the Melbourne punk scene and found immediate fans with their debut self-titled album. Their 2018 follow-up, How To Socialise And Make Friends, was a huge success that saw them nominated for an ARIA Award and debut at #6 on the Australian ARIA Charts. It was widely loved both in Australia and abroad and the album’s galvanising lead single, The Opener, shook up the Australian music industry.

“Releasing a track like The Opener, it’s taught all three of us to not care what people are gonna think or say about anything,” Hellmrich says. “There was no pressure. We’ve seen the worst of what people can say. It’s time to let go of other people’s opinions.”

This time around, Maq adds, “we’ve already said everything we’ve needed to say and it made the impact that it needed to make.”

“I feel like people already know where we stand on everything, because we’ve had to say everything over the time that we’ve been a band,” she says. “And now I feel we have the luxury of just making a beautiful album because we wanted to make a beautiful album. The world’s ending, we’ve all got jobs, we’re all doing our bit to keep the world turning in a special and different way, and this is just a little treat.”

It’s their bond – one forged in fire – that makes Camp Cope such great collaborators. For the band, creating this album felt simple and natural. “We’re just making art because we love each other and we want to make art together,” Georgia Maq says. On Running With The Hurricane, the purity of that intent and the triumph of their friendship shines through.