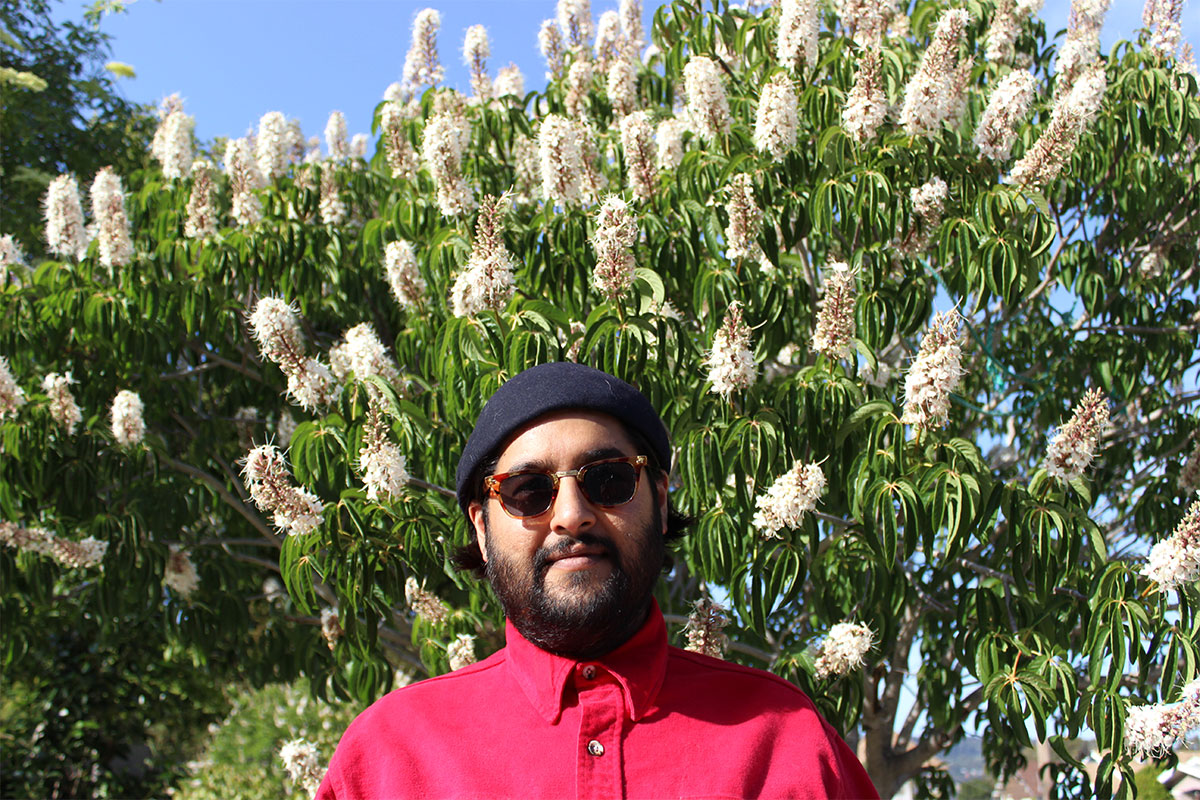 Healing Potpourri specialize in effervescent chamber pop that’s all but guaranteed to leave the listener in a better mood. But on their new LP, Paradise, the San Francisco-based band led by vocalist/multi-instrumentalist Simi Sohota offers more than just sonic escapism. The album, written and recorded over the past two tumultuous years, finds Sohota processing the often overwhelming deluge of stress, frustration, and despair that’s become a part of modern life. But rather than being completely deflated, he pushed Healing Potpourri’s sound in new directions, blending warm electronics and elements of vibrant psychedelia into something that’s as eclectic as it is instantly enjoyable. The result is 11 songs that seek to imagine a better world and strive to make it a reality, while also still taking the time to appreciate the moments of brightness that can shine through in hard times.

Healing Potpourri’s previous album–and Run For Cover Records debut–Blanket of Calm was released in the spring of 2020 to a very different world than the one it was written in. “When Covid hit, like a lot of people, I got depressed and scared,” Sohota explains. “Our record had just come out but we couldn’t do anything. We weren’t able to get together or play shows. So many people were talking about suddenly having free time to work on things and be creative, but I just wasn’t playing music at all.” After a few months, he decided to combat his creative rut by booking studio time with producer/engineer and longtime friend Jason Kick (Mild High Club, Marinero, Sonny & The Sunsets). “I was just trying to force myself out of it so I started going to the studio with Jason once a week. And it worked! I would bring in fragments that I’d be working on at home and then we would start arranging in the studio. We couldn’t get the whole band together so a lot of it was smaller by necessity.”

That purposely tighter circle did have room for one more: producer Sean O’Hagan. Known for his work in Stereolab and The High Llamas, the London-based musician would soon become a key collaborator on Paradise over Zoom. “I’m a huge fan of The High Llamas and I’d reached out to Sean back when we were working on Blanket of Calm,” Sohota says. “We weren’t able to make it happen then, but I got in touch again for this record and he ended up helping tremendously. Jason and I would work on a song and send it to him, he’d add something to it and then we’d get inspired by that. It became this back and forth process. I’ve been so obsessed with his music so it really was working with a hero of mine, but he helped coach me to make a record that sounded like me.”

The result, Paradise, incorporates many new sounds into Healing Potpourri’s music, particularly more electronic instrumentation and colorful psych washes that meld seamlessly with Sohota’s knack for rhapsodic songwriting and gorgeous melodies. “There are more synths, it’s more experimental,” he explains, adding, “Part of that was just trying to make a lush, full band sound with just me, Jason, Sean, and a computer, but the other part of it was just the swirling dread and fear and paranoia of the time.”

That sense of anxiety is palpable in Sohota’s lyrics, which directly wrestle with pandemic-era dread and social tumult. “I’d never really struggled with depression before the past couple of years, it’s kind of new to me,” he says. “The lyrics aren’t about everything being fine, I couldn’t write songs like on Blanket of Calm–I wasn’t feeling that way.” Songs like “Wind” and “Here” shimmer and pulse through detailed psych-pop that belies Sohota’s exploration of isolation and loss. “I’ve always been a fan of that happy delivery of sad lyrics,” he says. “I just think it can make things hit harder–delivering bad news with beauty.”

There is also plenty of beauty to be found on Paradise, even beyond the deeply pleasant sounds of the record. Tracks like the nearly-krautrock “Fireworks” or bouncing opener “Truly Good” find Sohota recognizing the moments of peace or happiness that still managed to peek through the darkness. “A lot of it was written during the height of pandemic lockdown, so there’s a lot of swirling feelings of despair, but at the same time there were new beginnings,” Sohota explains. “I was moving into a new home with my girlfriend and it was a little bit like trying to make our own paradise in the middle of chaos. I wanted to write about that too–writing about life includes the good and the bad.”

The title track coalesces many of the musical and lyrical themes that make Paradise such a compelling listen. It’s a sprawling cut of orchestral pop full of electronic flourishes and Sohota’s aching, yet hopeful words that imagine a more compassionate existence, but stay grounded in the grimmer reality of the one we have. “Our world can be a nightmare and it will continue to be unless we do something about it,” Sohota says. “I wrote this song after George Floyd’s murder and I was thinking about a lot of my favorite bands from the ‘60s and ‘70s, and how I just don’t know where they stood on any of the issues of their time even though they had these huge platforms. This song was sort of me trying to use my small platform to say something about this horror that’s on a lot of people’s minds.” It’s a mournful, beautiful song and one that’s indicative of the amount of growth Healing Potpourri has undergone through making Paradise. “I never want to be put into a box or have a formula,” he says. “I feel like there’s a lot of music in me, and this is just part of that. A lot of the record is about how bad things are and how I’m angry about it–but I realized that can be Healing Potpourri too.”