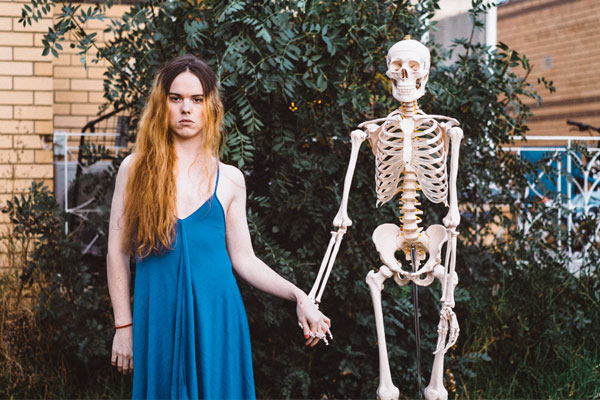 It is hard to imagine a more timely album than ‘mydata,’ the fourth solo release from the Melbourne-based pop artist Katie Dey. Her unique sound, which blends noisy synths with art-pop poetics, has felt ahead of the curve, but in this moment of quarantine-strained relationships and touch-starved isolation, ‘mydata’ feels even more prescient than ever. Dey’s crackling synths and pining vocals aren’t satisfied with the mundane question of whether love is possible over the internet. Instead, ‘mydata’ wonders whether love is a solution at all or if it’s just another wonderful, painful complication.

“It's pretty explicitly about an internet relationship, which can be precisely as meaningful as a relationship that’s physical,” Dey says. “Because a long distance relationship is obviously physical too, in a sense. It's physically felt in the body.” In other words, whether a relationship is sexual, romantic, or totally platonic in nature, distance doesn’t erase physicality, it changes it. One pang exchanged for another.

Dey didn’t set out to write an album about long distance affection, though. Like past projects, the soul of the album revealed it to herself in the middle of her songwriting process. “You usually learn so much in the process of starting a thing that it morphs along the way,” Dey explains, noting that this is in line with her normal process. Like past her albums, ‘mydata’ started out very scattershot and formless, but came together in pieces over a long period of time. “Old songs became relevant again, and things started to click into place.”

It was when she found herself writing “happiness,” the third track on the album, that the record’s identity coalesced. “I wrote that halfway through. It was just such a pleading, upset song. It was when I couldn’t write about literally anything else, because my mind was consumed, and all I was thinking was ‘I want love.’ I was trying to unpack all the words in that phrase, ‘cause there’s a lot to unpack.”

Even more to unpack when the relationship--like more and more--is fully online. Dey says that with ‘mydata,’ she wanted to validate the emotional reality of internet-based relationships. “Maybe people already feel that,” she says. “But I certainly didn't. I was trying to prove to myself, maybe, that a conversation is still a conversation. That sex is still sex.”

For all of her record’s timeliness, Dey emphasizes that she didn’t write ‘mydata’ as a response to COVID-19, but as a testament to the truth of her life and the lives of many others. “I mean it’s just how I’ve always lived. It’s how a lot of marginalized people have always lived,” she says.

Even before quarantine, more people than ever build their lives together online. And when so much of our relationships exist through corporate owned social media, video calls of questionable privacy, and chat logs backed up on some distant server, love gets even more complicated. “So much of my life is just on the internet. So many private, intimate moments. You can download this enormous chat log you have with someone, and it will be like 20MB. But that’s not where the relationship is. That’s not where it’s contained.”

Dey’s signature sound, which has been grounded in the digital since her 2015 debut ‘asdfasdf,’ is perfect to capture this tension between absence and presence--or perhaps between different kinds of absences and presences.

In some ways, that sound reflects Dey’s origins as a musician. “I was like 11 or 12,” she says, starting to weave her origin story. “My uncle had an old, fucked up Wurlitzer organ that he had to offload somewhere. And we took it and shoved it in a corner. It was one of the ones with three separate keyboards, with different sounds. So you could make some fucked up sounding shit.”

As she taught herself how to play and write music, she developed a unique style that is hard to fit into a single box. Dey’s work has drawn comparisons to art-pop greats--and personal inspirations--Kate Bush and Tori Amos, but she also finds herself associated with contemporary indie artists like (Sandy) Alex G or Frank Ocean (the latter of which featured “Only to Trip and Fall Down Again” from Dey’s ‘Flood Network’ on his popular blonded RADIO show).

With ‘mydata’ though, Dey develops the sound that drew her acclaim in some new directions, contrasting her reverb- and glitch-filled synths with clearer, brighter sounds. “There’s a lot of MIDI instruments that I wanted to mix with traditional sounding instruments,” she explains. “Plus some uncanny digital instruments, things that were recorded physically, but which still have a step of digital remove. The string samples were really played once, at some point, but the way they’re implemented can’t exist in a physical space.”

Nowhere is this new focus on blending and contrasting sounds clearer than in her vocals, which break through the layers of sound in a way all together new for Dey. “I think in the past I would use effects as a coping mechanism to mask gender dysphoria and vocal dysphoria,” Dey explains. On past albums, it was “a happy accident” that her vocals felt like an interesting stylistic choice. But four albums in, Dey’s goals as a musician, songwriter, and trans artist have changed. “As I get older and my ideas of how I want to present myself morph and evolve, I want more clarity in myself,” she says. “I want to be heard and understood, and I want to convey a self that isn’t misinterpreted as much.”

It all works to underscore the album’s focus on data loss, translation, distance, and tentative connection. When noise crumbles around her full and unafraid vocals, she feels at home in the buzzing networks that deliver us to each other. And when crisp electronic strings emerge from the mess, Dey’s voice instead insists on the honesty of distortion. These are songs that understand that love is the thing that happens when something starts to break just the right way, like a favorite hair tie stretched a little too far. "If I could be a lightbulb,” Dey lilts on the album’s metamorphical opener, “I'd explode the moment you install it."