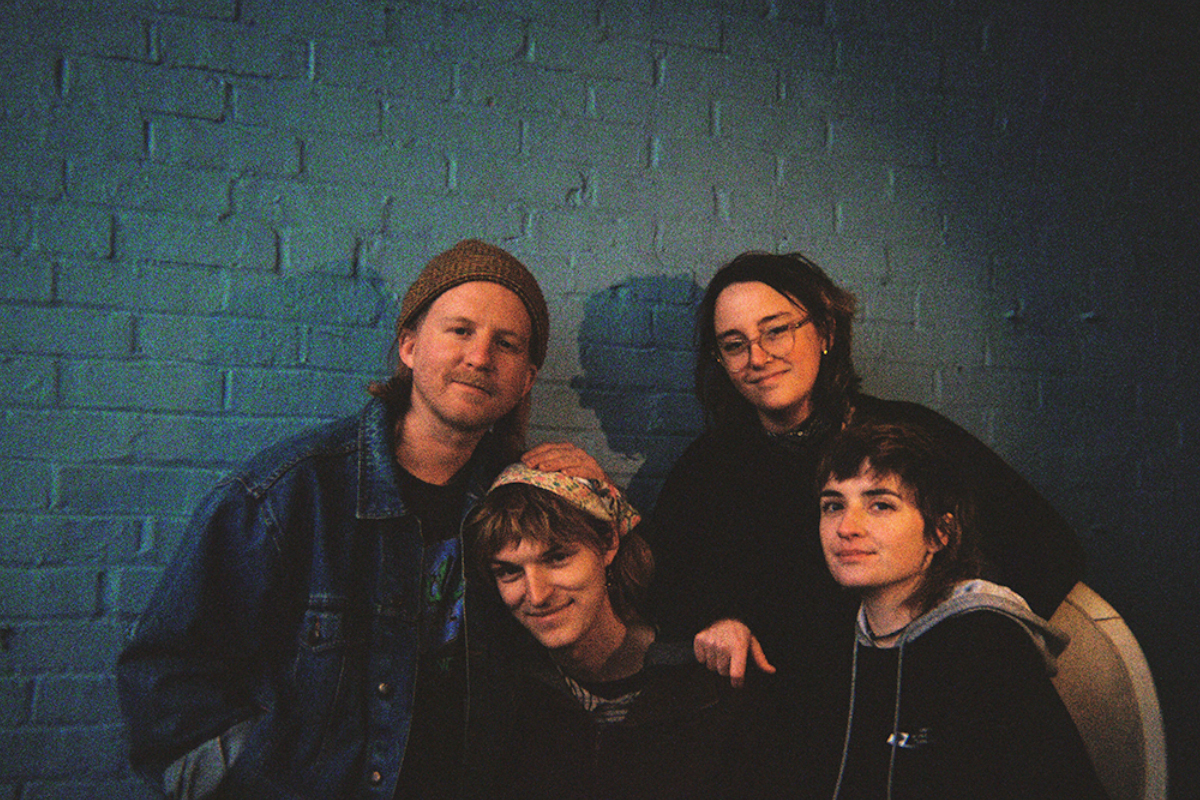 There’s a palpable feeling of intimacy throughout every moment of Radiator, the debut album from Philadelphia’s Sadurn. The band’s spare-yet-satisfying instrumentation, diary-like lyrics, and graceful vocal harmonies bring you in extraordinarily close, breaking down any walls between artist and listener to offer fleeting glimpses of life’s most internal moments—as well as one of the most compelling debut records in some time.

Sadurn started as the solo project of Genevieve DeGroot, who picked up the guitar in 2015 in an effort to delve deeper into songwriting. “I came to the game really late relative to most people,” DeGroot explains, “I didn’t start playing guitar and really writing songs until after college. I’d always been a singer but I just felt like I needed an instrument to really write songs on.” It wasn’t long until DeGroot was creating the music that would eventually become Sadurn. “When you reach into a new creative outlet, it’s really exciting because there’s just so much there. I didn’t have this idea that I was going to go and become a musician, but I was learning new chord progressions and writing, and I’d moved to Philly and was surrounded by other songwriters.” One of these fellow musicians was guitarist Jon Cox, who joined up with DeGroot to form an early incarnation of Sadurn. The two started playing DIY shows in the city and released several homemade, charmingly lo-fi EPs, then in early 2020, a chance experience kicked off the next phase of Sadurn. “My friend Amelia [Swain] was just learning to play drums, we started playing some of my songs together and it just made sense, we both had this feeling that we had to do this.” The group was soon joined by Tabitha Ahnert who had recently taken up bass, and Sadurn’s new lineup was complete.

With new members and an evolving sound, the beginning of 2020 was meant to be the four-piece’s debut, but the world had other plans. “I’d already been scheming about making a record before the pandemic because I was excited about the full-band songs,” says DeGroot. “We played one gig together and then everything got put on hold for a while.” After months of isolation and waiting, Sadurn figured out a way to push forward. “The only way we thought it could work was if we isolated together for a couple weeks, so we found a cheap Airbnb in the Poconos and our friend Heather Jones brought out all this recording gear.” The band moved the furniture and created a makeshift recording studio, tucking themselves away in close quarters, with only passing animals around to witness the making of what would become their first full-length. “We didn’t even know if we were going to do enough songs for an album at first, it was kind of a mystery of what was going to work,” DeGroot explains. “The whole project up to that point had been so lo-fi, so close to the source and unproduced. I wanted the band and the new recordings to still have that to some extent. We’re all so close and we were living in this cabin for two weeks making this thing, I think it was sort of the special circumstances that lent themselves to the way the album turned out.”

That warmth and familiarity permeates Radiator, with its roomy recording and lean instrumentation nimbly serving the songs, bolstering DeGroot’s stunning vocals and conversational lyrics. Sadurn’s affecting indie folk draws on a range of influences from Jason Molina, to Gillian Welch, to Alex G and Elliott Smith, working in the tradition of songwriters whose melodies are as captivating as the words within them. Radiator explores the struggles and eventual beauty of grappling with multiple emotional realities, particularly when it comes to relationships. “I definitely write as a way of processing what’s going on,” says DeGroot. “I’m usually making space for a feeling or a thought that, for some reason, I can’t talk to other people about because it’s too destructive.”

Indecision, doubt, heartbreak, the idea of being forced to choose–these internal conflicts are wrestled with throughout Radiator. Tracks like “snake,” the album’s instantly powerful opener, and “golden arm,” an unhurried ballad that shows its truest colors with time, are full of memorable moments and emotional detail. Elsewhere “moses kill” tries to make sense of unresolved feelings around identity and family overtop acoustic guitars recorded so closely that you can hear fingers moving from fret to fret, while mid-album highlight “special power” is an unabashed breakup song with a soaring chorus that belies its aching lyrics. “If you’re having doubts about a relationship, there aren’t many places you can air them,” DeGroot says. “Writing about that kind of thing is a way to wrap your mind around them.”

Radiator culminates in the penultimate song, “icepick”–a mix of gentle guitars, a hazy drum loop, and DeGroot’s revealing lyrics that slowly tumbles into album closer “<---.” This final track is a cascading reversed version of “icepick” that plays almost like an instrumental plea to go back in time, armed with the perspective and knowledge gained from a challenging experience. A sense of daring-but-necessary honesty emerges as “<---” abruptly ends, and you start the album over. True closeness isn’t always easy to achieve, but with Radiator, Sadurn prove that it’s worth the risk.