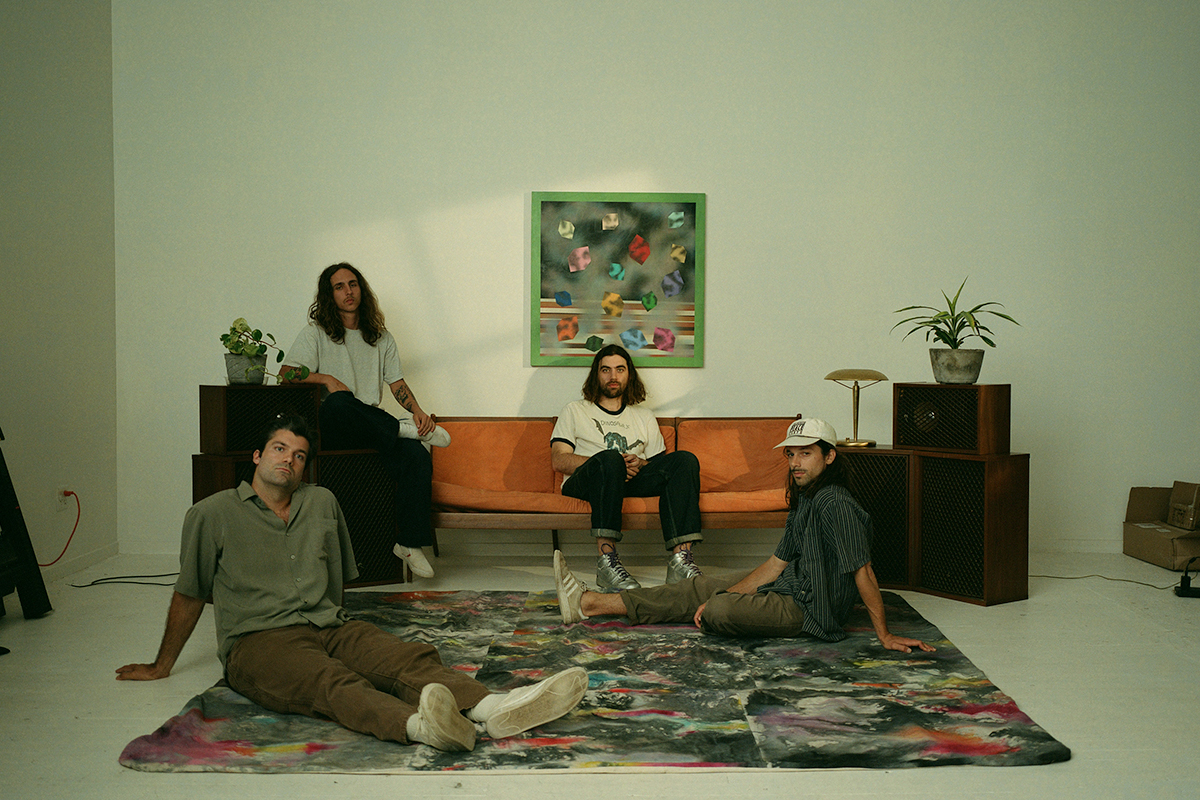 In early 2020, Turnover were touring Europe fresh off a US tour for their new album, Altogether.
As the pandemic caused borders to begin closing in around them, the band cut the tour short and got one of the last flights home - not knowing stages around the world would be dark for almost two years.

Since 2012, the band has been touring full time, averaging 200 shows each year. In their time away from the road, the band had the opportunity to explore and deepen aspects of their lives that they hadn’t been able to in the past. “I tried to be as positive as possible about the change in my life. Instead of thinking about the things covid was taking from me I wanted to focus on what it could give me,” says singer Austin Getz.

The title track of the band’s new album, Myself in the Way, speaks to this mindset. “I can’t put myself in the way of love again,” sings Getz, “I promise I’m going to go all the way with you,” is specifically about Getz getting engaged to his longtime partner, but applies to the general outlook he had toward life in lockdown. “I was living in Sebastopol, California at the time and felt like I truly lived there for the first time since I wasn’t leaving for tour. I was able to go meditate at the Zen Buddhist dojo down the road, run and bike around the hills in Sonoma county, learn about plants and gardening, take some Spanish and arboriculture classes, and get involved with the volunteer fire department. Just do a bunch of new things to challenge and inspire me in a natural way.”

Turnover’s other members also used the time to deepen interests they hadn’t been able to fully explore before covid. Bass player Dan Dempsey was in New York City and responded to lockdown by spending more time practicing his visual art in drawing and painting. He painted the album’s cover during this period and developed a style that has become a central theme for the band in its current iteration. Drummer Casey Getz found work at a Virginia Beach state park as touring continued to be postponed. He was in search of and inspired by having a work-life balance different than he’d experienced since he was younger. Through this, he was able to nurture current relationships more and find new ones, something touring made much more difficult. This led to Casey playing drums with a group of longtime friends in Virginia Beach and further developing his drumming style - adding a new prowess for fluidity and improvisation through lengthy jam sessions with the group. Guitarist Nick Rayfield was focused on sharpening his guitar and piano playing and was able to devote energy to skateboarding and his retail business more than he had been able to for the last few years. This was also the band’s first album with Rayfield making songwriting contributions after touring with them for years as a live member, adding a new creative element to the songs.

Over 18 months Turnover weaved these individual experiences into a collective work, recording the LP over two sessions with longtime collaborator Will Yip at Studio 4. Austin is credited, for the first time, as co-producer.

“I had specific ideas for sound design on this album. I knew a lot of sounds I wanted to hear and use. We wanted everything to be able to be heard and have its own place. I was inspired by the way Magical Mystery Tour and Dark Side of the Moon sounded. We decided to go a lot wider with it and utilize panning and stereo more than we had in the past, while also wanting it to sound tighter and smaller than some of our earlier records. We were inspired by drum and bass sounds from Chic and Quincy Jones records from the 70s, so we put the drums in the control room to get them to sound smaller. We used an active pickup bass and a jazz bass to get that percussive sound from the bass so the low end wasn’t as rumbling and subby. We let the synths share some of that low end that the drums and bass gave up. Quincy's approach to arrangements were a huge inspiration in this record as well. The horn and string lines I wanted to sound like classic era disco, mixed with modern synth and vocal sounds. I had been experimenting with my own vocal styles a lot and utilized autotune and vocoder on this album almost as instruments on certain songs as a stylistic choice.”

The band has always been DIY, but post pandemic they have taken that to a different level. They appreciate more than ever how lucky they are to get to be together and have fun creating things with their friends. They have found that they are usually best suited for executing their own vision, not only musically, but with all its accompaniments as well. For this album they made all their own videos in collaboration with friends and using Dempsey's drawings and paintings.

Change is authentic and true to Turnover as a band and as individuals. Chart a course through their discography and find a band continually reinventing themselves with a unique artistic ambition. Myself In The Way arrives finding Turnover doing the same within their own persons, pushing the band into new and exciting parallel depths of expression.